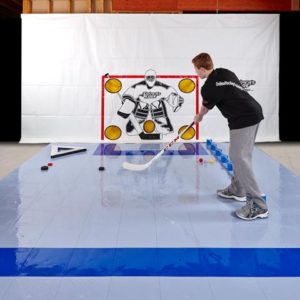 I was recently watching a TV feature on an NHL player who invited the viewing audience on a tour of his childhood home. We met his mom and dad, his siblings, his dog, got a tour of the house and hung out with some of his friends. What was really cool was getting to see where and how he spent most of his time growing up, which included his basement where he shot pucks, in his backyard on the family ice rink and even playing tennis, basketball and just about any competitive sport.

As the game of hockey has evolved into a national sport with great players coming from every corner of the U.S., it should come as no surprise to aspiring players that if you want to maximize your potential, it’s really what you to away from the rink that will determine how far you make it as a hockey player.

When players leave practice at the rink, they all have the same decision to make after they get their homework done. As an old coach used to say, ‘we all have the same number of hours in a day, it’s up to you how you spend them’. So players have a decision to make, will they watch TV, play video games, sit on their phone, or work on hockey skills and hockey development?

During one point of the TV feature the father of the NHL player was standing in their unfinished basement which served as their shooting room. The father was standing in front of a wall that, at one point before the color of vulcanized rubber took over, was probably the color of fresh wood and perhaps even the name of the shooting tarp was visible. The puck marks on shooting area of the concrete floor looked like the track at the Daytona 500.

“I can’t tell you how many thousands, and thousands of pucks have been shot down here,” said the father. Later in the show, talking about their backyard rink, it was again stated that the time, memories and frozen toes were too numerous to try to begin to quantify.

Meeting this NHL player via the TV show made me think back to some of my own experiences, and of those around me who were fortunate enough to play in college or even the NHL. They were the first ones on the rink and the last ones to leave. And they were also the players that had a net in their backyard and dozens of sticks in a barrel in their garage with the blades worn down to nothing. These worn out blades and banged up nets were a badge of honor for these players, and a testament to their dedication to the game. You could tell exactly how bad a kid wanted it by the condition of his training area.

And years later, after watching this segment on today’s NHL players, the same is true. So the question is, how bad to you want it? Are you willing to put in what it takes away from the rink?

After all, everyone has the the same number of hours in a day.