When it comes to scoring goals, it all starts with a great shot. 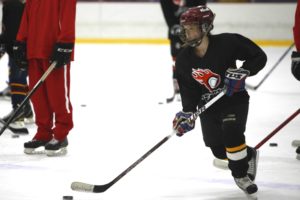 An old coach of mine used to tell our team that you can never shoot enough pucks, and that the all of the great goal scorers could pick a spot, and hit it 9 out of 10 times. He would then tell us to go home and shoot pucks in the driveway, basement or back yard, and once you hit your target 9 out of 10 times, pick up the pucks and do it all over again.

Of all the great players that I’ve skated with, I always remember the guys who could shoot the puck. Some had a really heavy shot, but not great accuracy. Others could snipe a spot no larger than a mouse hole every time, but weren’t strong enough to beat the better goalies. The really great shooters had a combination of both power and accuracy.

With today’s stick technology, finding the right stick is a very important factor in shooting. The science in sticks today has been a game changer because of the flex and whipping motion that with the right technique, allows players to shoot harder than ever. Make sure to pay attention to the the pattern and flex which will play a role, especially as players get older, in developing a good shot.

So how can you increase the accuracy and power behind your shot? At our hockey camps we stress the importance of the fundamentals in shooting technique. This varies a bit from player to player and also by the age of the player. Older, stronger players have the strength to lean on a stick, creating the torque necessary to best leverage the technology in sticks. Younger players meanwhile, may not have the strength, and need to really rely on accuracy, while developing the strength and technique needed to score on goalies as they get older, and as the goaltenders get better.

Another key to a great shot is keeping your head up and your feet moving. We see a lot of players who have a good shot, but cant snipe the spot because their head is down and they don’t ever see that wide open top corner! Also, as soon as you stop moving your feet, it’s a big clue to the goaltender that you may be going for a deke versus a shot.

If you are spending your time away from the rink shooting pucks , you are already on your way to scoring more goals this season. Remember to practice all shots including the wrist shot, snap shot and slap shot. Each require a unique discipline that with the right stick, will allow you to shoot to thrill!