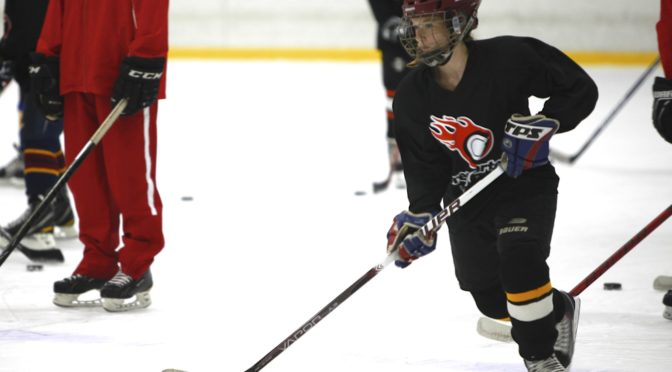 Having coached and watched many games this season, I’ve been reminded of how important it is to know what to do with the puck in goal scoring situations and, just as importantly, what not to do! For a select few players scoring seemingly comes at ease as they light the lamp with the demeanor of a natural goal scorer. However for the great majority of players, it’s not quite as easy and mistakes are made, opportunities are lost and starts to slide.

Down low, shoot high. When you have the puck on your stick down low around the goal, the opposing goaltender most likely is going to be ‘down’ as well, meaning your best chance to score will be up high. Players often make the mistake of just shooting the puck anywhere at the net, oftentimes right into the pads or jersey of the goalie. Instead, players should be recognizing that with the current trend in goaltender style of play, when the puck is down low, the goalie will most likely be down as well, so they instinctively know the best chance to score will high, up and over the goalie with a bottle-knocker!

In the slot, take the shot. It’s not often that a player finds themselves all alone in the slot with the puck on their stick, but when they do it’s never a bad idea to fire a great shot on net! For as many bad angle shots that are taken during a game, it’s always interesting to see how many times a wide open shot in the slot is not taken, instead trying to make one more perfect pass. While everyone enjoys an awesome tic-tac-toe goal and a selfless teammate, dangerous goal scorers know how to bury the puck when they are left alone in the slot.

Paralysis by analysis. The best goal scorers have excellent instincts and without hesitation know what to do with the puck. Don’t make the mistake of waiting for the perfect shot or perfect pass because good opponents will be there to pick your pocket and before you know it, the puck is on their stick heading in the opposite direction. Practice is the best way to gain the repetition needed to be comfortable and confident with the puck on your stick in a goal scoring situation. And most importantly, make a decision on how you are going to score, and then bury the biscuit!

Thank you for reading and from our hockey family to yours, Happy Holidays! ?  Our 2019 Summer Hockey School dates and locations are being updated so be sure to claim your spot early!