Are You Ready To Score The Game Winning, OT Goal?

The ‘instant classic’ five overtime NCAA playoff game between North Dakota and Minnesota-Duluth ended with a dramatic goal from UMD’s fourth line. This line hadn’t seen much ice time in overtime, but these players stayed focused and kept their head in the game. And when they got their opportunity, they capitalized.

When your name is called, will you be ready?

Mental toughness is a big part of hockey. And at no time is it more important than tournament time when the season is on the line.

Championship teams are comprised of players who don’t focus on themselves, but instead keep their eye on the big prize and winning a championship for the team.

Players work extremely hard during the off season at summer hockey schools to prepare for the big moments during the season. The endless hours of practice time during the season also prepares players to be at their peak when the championship is on the line.

The best players know that both will and skill combine to win big games. While it can be easy to lose focus when playing time gets reduced or one line sees more ice than another, it takes a team to win a championship.

This was never more evident than when UMD’s fourth line got put on the ice in a fifth overtime. With the season and a birth to the Frozen Four on the line. These players were locked and loaded and hit the ice with the energy and intensity as if they had been playing a regular shift all a game!

The next time the game is on the line, stay positive and stay focused. Keep your eye on the big prize because when your name is called and the puck is on your stick, you need to be ready to score that big goal!

Thanks for reading and good luck in your end of the season tournaments. We invite you to train with us this summer at one of our summer hockey camps located in 11 states. Click here for dates and locations!

Decisions can be difficult to make, especially when it comes to hockey development and the path to success. The best players make a decision, commit to it, and that is when the work, and progress, really begins!

Over the past 27 years of running summer hockey schools we have experienced some very interesting trends. There were years when registrations for our spring leagues and summer hockey camps happened so quickly that we were nearly sold out within weeks of opening registrations. We have also experienced years when some of took a ‘wait and see’ approach, such as last summer during the COVID-19 pandemic.

With the development path of hockey players constantly evolving, this season we are back to a more traditional season. Players are setting goals and making commitments early regarding how and where they are going to spend their spring and summer training months.

We are very proud of the fact that training “the CARTER method” has become a tradition for many families and groups of players that refer one another to our spring leagues and summer hockey schools. It’s rewarding to watch registrations come in with recognizable names from previous seasons. It’s exciting to look forward to working with players that we have trained in the past, and continue to help them in their pursuit of hockey excellence.

If you are a serious hockey player and are striving to take your game to the next level, we invite you to participate in both our spring leagues as well as our summer hockey schools located in 11 states during the summer of 2021.

Our Pro Staff focuses on development and working with each player to evaluate their current strengths, identify areas of improvement, and ultimately help them achieve their development goals.

Please feel free to reach out to us with any questions about your path to success. Hockey is who we are and we look forward to the opportunity to help you develop the skills necessary to achieve your goals.

For dates, locations and details for our spring leagues click here. More information about our summer hockey camps can be found here. Good luck with the final weeks of your season and we look forward to seeing you at the rink!

The Coolest Rink Ever 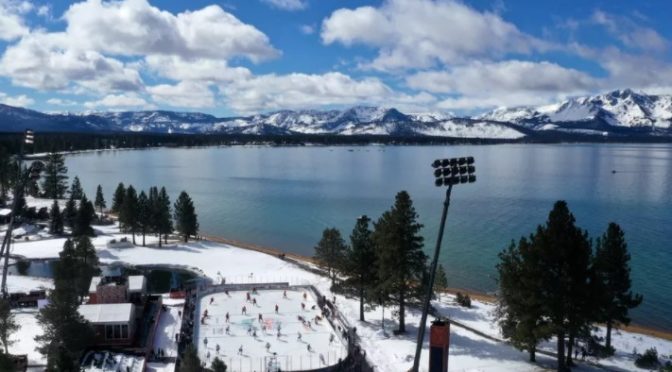 Hockey players love to play in great facilities. There is something special, motivating and inspiring about lacing ‘em up at TD Garden, Agganis Arena, Conte Forum or any other storied facility where great players have scored legendary goals, won championships and created history.

The NHL Outdoor Series last month set on the shores of Lake Tahoe created a new dream for players wanting to one day skate on the same ice where their heroes play. Unfortunately, the mid-day ice conditions did not cooperate and the game had to be postponed until after sunset.

However, the beautiful setting of the white frozen ice built next to the mystical blue waters of Lake Tahoe, all in the foreground of the Sierra Nevada’s created a setting unlike any we’ve seen in hockey. Lake Tahoe is already considered one of the most beautiful places in the world and when you add an ice rink to the scenery, you have one of the most beautiful hockey settings in the world!

As you work hard over the next few weeks to win your end of the season playoffs and advance to play on the biggest stage at some of the coolest rinks, remember that it’s the hard work and dedication away from the limelight that gets you to the spotlight.

In the great movie Hoosiers, the coach brings his small town basketball team to play for the state championship in a gym – and setting – larger than they have ever seen. In a classic scene, the coach breaks out a tape measure to show that even though the facility is giant, and the stage enormous with the state championship on the line, the basketball hoop is still 10 feet from the floor; the exact same height that it is in their small town gym back home.

Playing end of the season tournaments for the championship creates a lot of crazy emotions. One important thing to remember is that, just like in Hoosiers, the goal is still 6’ x 4’. The ice is still ice and the game is still the game. Focus on putting all of the skills you have developed throughout the season to use and block out the rest of it.

Thanks for reading and good luck in your playoffs. Please reach out to us with any questions about our summer hockey schools located in 11 states this summer. We invite you to come train with our Pro Staff and take your game to the next level!

The Great Ones Make It Look Easy

Social media is full of skill videos featuring hockey players making incredible dekes and dangles and then finishing with a storybook goal. Watching this talent leaves everyone on the edge of their seat wondering ‘how’d they do that’? The answer is really quite simple: practice!

This summer we enter our 27th year of summer hockey camps in 11 states. It never ceases to amaze our pro staff how much the talent of young hockey players increases with each passing season.

Last year at summer hockey school after watching a player make a move that literally brought the coaches to applaud, we asked the player where he learned the move. The answer, not surprisingly, was by practicing it. Over and over and over again.

Like so many do, this player saw a goal scored on social media and immediately tried it. Then again at practice, and then again at home, in the basement and in the driveway. Everywhere and anytime this player had a stick and a puck, ball or anything else, he was practicing the same move.

Repetition and muscle memory are key to athletic success and within a relatively short period of time the player became successful with this move. After several more hours of practice he became great. Soon, he would ready to try it in a game!

There is an old saying in sports and life that “The great ones make it look easy” and when it comes to hockey skills this is definitely true. However, as we have talked about in past articles, the great ones only become great after spending hundreds or even thousands of hours honing their craft.

We encourage you to become great! Start by identifying an area of your game that needs improvement and dedicating yourself to working on it until it becomes natural. Find a great deke or dangle on the internet and work on it until you become great!

Thank you for reading. We invite you to train with us this summer at one of our hockey camps located in 11 states. For dates, locations and to register, click here.

What’s Your Forecast This Season?

As forecasted, we got walloped by a Nor’easter this week. Were you ready? What is your forecast for your hockey season? Are you ready?

Winter is finally upon us, as is the hockey season! As both came blowing in it’s a great reminder about the importance of being prepared. Just as you need that shovel or snow blower ready to clear the driveway and ten inches of snow, so too do you need to be prepared as you head to practice or your next game.

In our last article we talked about “The Early Bird Gets The Worm”. We’ve also covered The Six P’s: Proper, Prior, Preparation Prevents Poor Performance.  The huge snowfall this week is just another great reminder that when you get dumped on, you better be prepared to dig yourself out.

Heading into the season there was plenty of time to get ready and be prepared to hit the ice. So now that we are closing in on a regular routine again, is it all paying off?

We hope you don’t get caught in the snowstorm this week, or in the flurry of a start of this season. Keep planning, prepping and doing all the little things because it’s all those little things that add up to really big things!

Thanks for reading! Our entire staff wishes you all the best this season. We also invite you to train with us this summer at one of our summer hockey schools located in 11 states. Registration is now open and space is already filling fast!